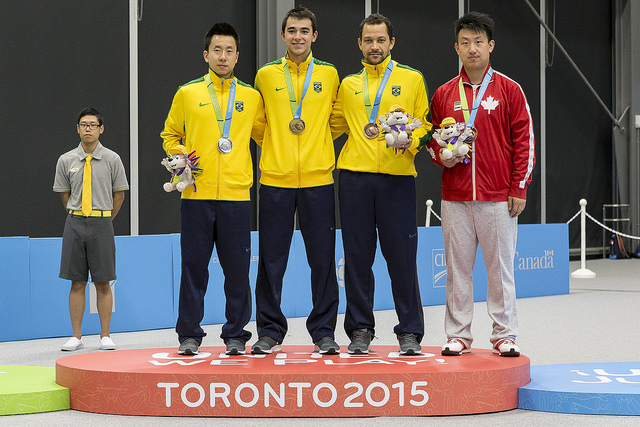 An important player for the Canadian’s Men’s team who also won bronze, Ontario player Eugene Wang added another medal to his Pan Am resumé…

As Canada’s highest rated player, and the second seed at this year’s Pan Am Games, Eugene Wang held his ground in the group stage of singles competition. Losing only one game, he earned a berth in the round of 16. He maintained his form, beating fifth seed Andy Pereira four games to one. In the quarter-finals, he accounted for Argentina’s Pablo Tabachnik without dropping a game. His dominant performance set up a rematch between him and Hugo Colderano of Brazil in the semi-final. In the teams competition, Colderano had beaten Wang three games to two. Unfortunately, history repeated itself with Colderano defeating the Ontarian again by the slimmest of margins, four games to three.

Ontario’s Anqi Luo also finished atop her qualifying group, earning her spot in the round of 16 where she defeated Angie Umbacia. The quarter-finals brought Anqi’s tournament to an end when she was unable to upset the third seed, Gui Lin of Brazil.

More photos from the Pan Am games can be found here.